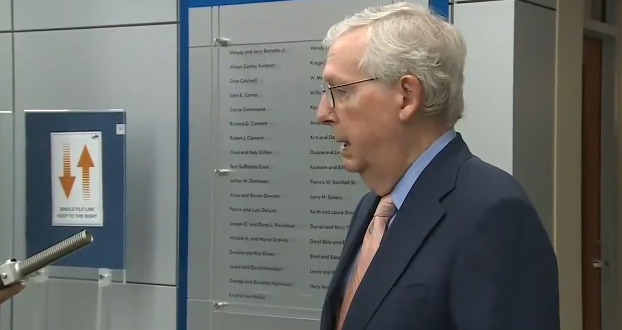 McConnell: It Serves No Purpose To Call Out Vax Lies

Senate Minority Leader Mitch McConnell was asked on Monday why he has not called out members of his caucus for their dangerous anti-mask and anti-vaccine rhetoric. The Kentucky Republican said he did not think speaking out against other people was helpful.

“I don’t think it serves any particular purpose to start criticizing others,” told a reporter at a University of Kentucky event. “I think the best thing for me to do is to say how I feel about it and try to encourage those people who care what I think to do the right thing.”

But many members of his Republican caucus have been actively undermining efforts to curb the spread of the virus and have pushed misinformation.

McConnell’s response to his own lack of accountability: “Well, let’s not criticize.” 🙄https://t.co/lFEVZs9Hr3

Senate Minority Leader Mitch McConnell on why he won’t call out Republicans downplaying the vaccine and pushing back on mask mandates:

“I don’t think it serves any particular purpose to start criticizing others.” pic.twitter.com/UVbsIyCPsm