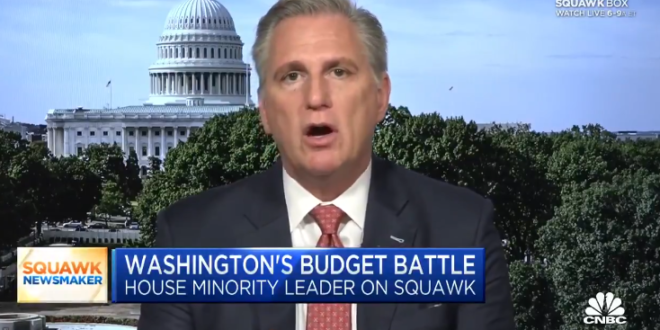 McCarthy: Budget Bills Will Pass “Over My Dead Body”

House Minority Leader Kevin McCarthy vowed Wednesday to do everything he can to stop Democrats in Congress from passing the multitrillion-dollar infrastructure and social spending plans backed by President Joe Biden.

But now that House Democrats appeared to have resolved their differences and voted to advance those plans, it’s not clear what McCarthy can do.

“It’ll be over my dead body, because I’m going to do everything in our power to stop it,” the Republican leader said on CNBC’s “Squawk Box” when asked if he expected trillions in new spending to pass Congress by September.

“They’ll probably even get more. The far left is much stronger. You watch Cori Bush, you watch what AOC does. They hold this Democratic Party hostage to their socialist beliefs and they have won time and again,” says @GOPLeader on Democratic bills. pic.twitter.com/YKR7YLykTP