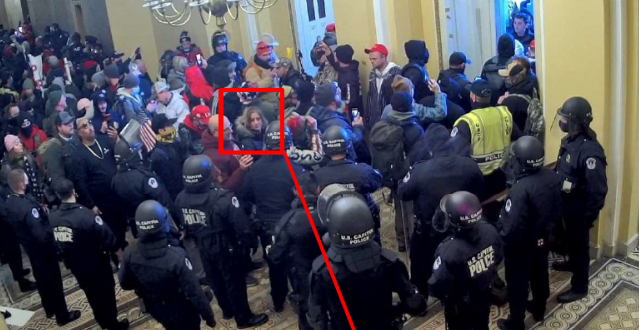 A Maryland couple has been arrested in connection with the Jan. 6th siege at the U.S. Capitol Complex. Christopher Price and Cynthia Ballenger were charged in a federal criminal complaint on Monday. Federal authorities were anonymously tipped off to the defendants’ alleged participation in the riot on Jan. 12 in a message that claimed Ballenger and her husband were “part of the crowd that entered” the national seat of legislative government on the day in question.

Price allegedly sent their friend a text message on Jan. 6 that said: “We’re just taking over the capitol.” The friend replied: “Trump said to be peaceful.” Price allegedly replied back with a photograph and captioned it: “Tear gas and explosions going off.”  Search warrants later allowed the FBI to determine that Ballenger and Price had logged into their wireless devices and used their online profiles for roughly two hours while inside the U.S. Capitol.

“We’re just just taking over the capitol… Worth fighting for Trump.”

Chris Price and Cynthia Ballenger were arrested yesterday in connection with the Capitol attack. They took the Metro in from Shady Grove, per feds. pic.twitter.com/ebNQngyc20

Per charging document, husband told feds “hypothetically” if he was in the mob.. he was “not among those causing problems”

The “hypothetical” didn’t prevent him from being charged pic.twitter.com/Cr7oJZkbHh

Ballenger was snotty with the FBI agents, responding to their questions with, “You should be able to figure it out.”https://t.co/P0Af84kkFC pic.twitter.com/BmfxPkof4f