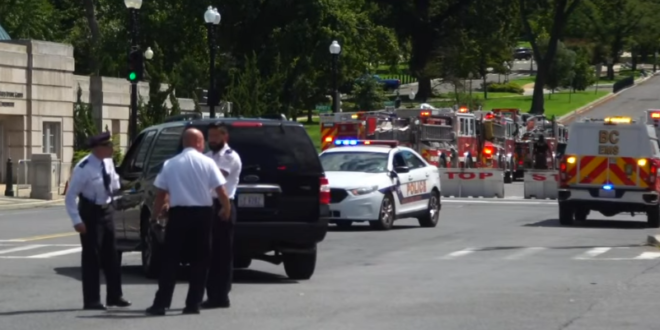 Man In Truck Outside US Capitol Claims To Have Bomb

A man sitting in a pickup truck outside the Library of Congress told police on Thursday that he had a bomb, prompting a massive law enforcement response to determine whether it was an operable explosive device, people briefed on the matter said. The truck had no license plates, and when law enforcement noticed it in the morning, authorities reported a possible bomb threat over police radios. Investigators were trying to determine whether the man was holding a detonator.

They were communicating with him as he wrote notes and showed them to police from inside the truck, according to three people were not authorized to publicly discuss the matter and spoke on condition of anonymity. Police sent snipers to the area near the Capitol and Supreme Court and evacuated multiple buildings on the sprawling Capitol complex. Congress is in recess this week, but staffers were seen calmly walking out of the area at the direction of authorities.

BREAKING: Police are investigating a report of a possible explosive device in a pickup truck near the Library of Congress in Washington, D.C. The area around the building has been evacuated. https://t.co/15n397nev4

MEDIA ALERT: This is an active bomb threat investigation. The staging area for journalists covering this situation is at Constitution and First Street, NW for your safety.

Please continue to avoid the area around the Library of Congress. pic.twitter.com/jTNVaBmVwR