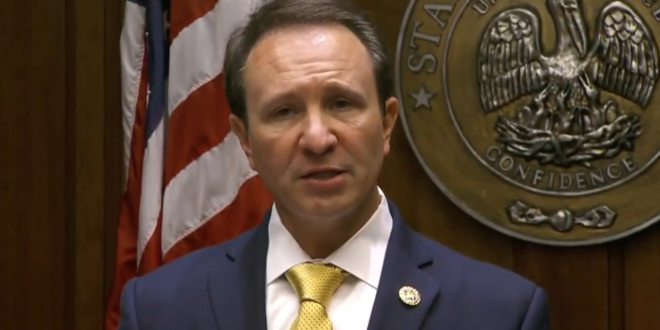 Louisiana’s State Bond Commission voted to delay action on funding for several projects in New Orleans, including renovations to the Superdome.

Commission members, including Attorney General Jeff Landry [photo], were explicit about what they wanted to see before they would issue funds for the Superdome: Refunds for Saints season ticket holders who would not comply with the new COVID safety protocols as well as an option for them to hold their tickets until next season.

Landry even suggested the option of automatically approving the funds after the Saints adjusted their refund policy to meet that criteria. State Board Commission members said they wanted another 30 days to not only see if the Saints changed their policy, but if they did it in a way they considered fair. The motion passed 12-2.

Read the full article. The vote also delays funding for a children’s hospital and disability access projects. It’s what Jesus would want.

Previous Woman Gets 25 Years In Hate Crime Murder Attempt, Targeted Two Children With Her SUV Over Their Race
Next CHATTER AWAY: Overnight Open Thread