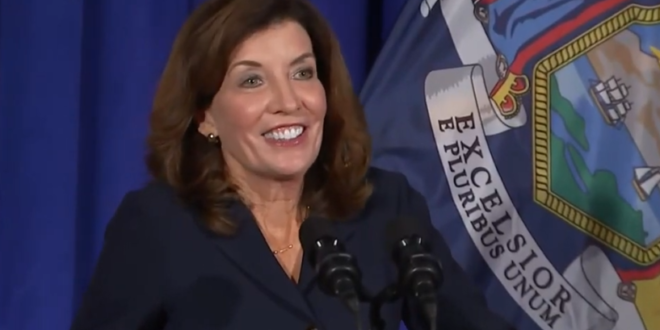 Kathy C. Hochul, a former congresswoman from Buffalo, became the 57th governor of New York early Tuesday, making history as the first woman to ascend to the state’s highest office.

She was sworn in at the State Capitol by the state’s chief judge, Janet DiFiore, in a private ceremony, capping a whirlwind chain of events that followed a series of sexual harassment allegations made against the outgoing governor, Andrew M. Cuomo.

“I feel the weight of responsibility on my shoulders and I will tell New Yorkers I’m up for the task,” Ms. Hochul told WGRZ-TV, a Buffalo-based news station, shortly after she was sworn in. “I thought about all the women that came before me, including my mother who was not there, but a lot of women through history, and I felt they passed the torch to me.”

HISTORY: Kathy C. Hochul has been sworn in as New York’s 57th governor, becoming the first woman to hold the state’s highest office.https://t.co/d7HXgHTMEE

Previous CHATTER AWAY: Overnight Open Thread
Next Cruise Lines Mandate Vax For All Passengers Over 12