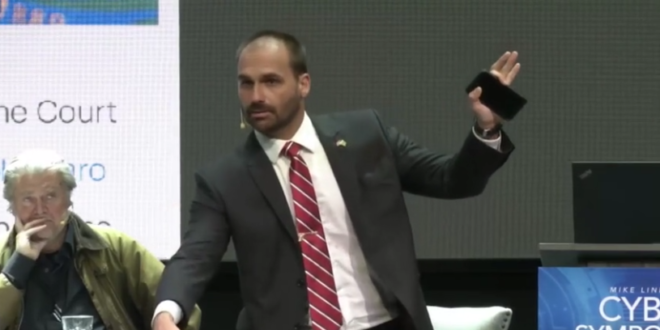 Eduardo Bolsonaro, who is also a politician, attended part of the 72-hour “cyber symposium” held in Sioux Falls, South Dakota by Lindell, who has been a leading promoter of voter-fraud conspiracy theories.

After stepping onto the stage the early hours of Tuesday, Bolsonaro gave Lindell a red MAGA hat which he said Trump had given him when they met on Monday. The hat was signed “to Mike, a great patron,” Bolsonaro claimed. Lindell said: “Thank you Mr President, our real president.”

Lindell: “We have the president’s son, Elduard — Eduardo, coming here, Barsana — if I say it right, Bar, Barsa, how do you say it, Bars, Barsaron, Barsonaro, no … how?

Lindell: OK, Bolsonaro. He’s going be coming her to speak in a couple hours. pic.twitter.com/GmHzAJdjkl

Lindell: “I want to bring in, um, — Steve, maybe you can introduce your friend, you guys, we have uh from another country, Brazil, –”

After butchering the name of Bolsonaro’s son, Mike Lindell refers to him as simply “Brazil” pic.twitter.com/mdIgztTx6i