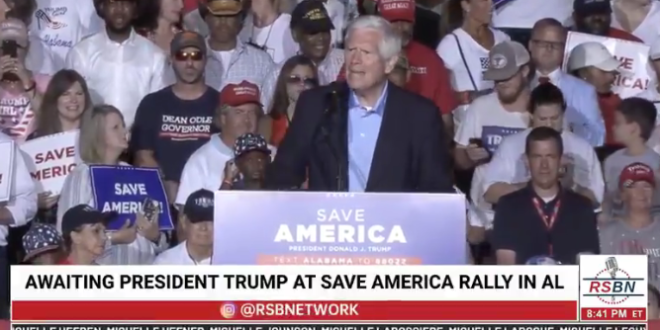 US Rep. Mo Brooks (R-Ala.) was booed by attendees of the “Save America” rally on Saturday in Cullman, Alabama, during his introduction for former President Donald Trump.

As the crowd responded with boos and other shouts, he urged attendees to look forward to the upcoming midterm and general elections. When attendees continued to shout, Brooks threw his hands up and said, “Alright, well look back at it, but go forward and take advantage of it!”

Mo Brooks was booed by Trump rally attendees after he told them to move on from 2020 ‘election theft’ https://t.co/RiWnAG5IjU

Oh boy. Mo Brooks suggested, in seriousness, that those in attendance should accept the results of the 2020 election and move on to the next one

… needless to say it did not go well and he nearly lost the crowd 😮 pic.twitter.com/1htgV3QAgm

This is a first person view of what happened when Mo Brooks told MAGAs to put 2020 voter fraud and election theft behind them and look forward at the Trump rally last night. pic.twitter.com/zWQOjKFsPY