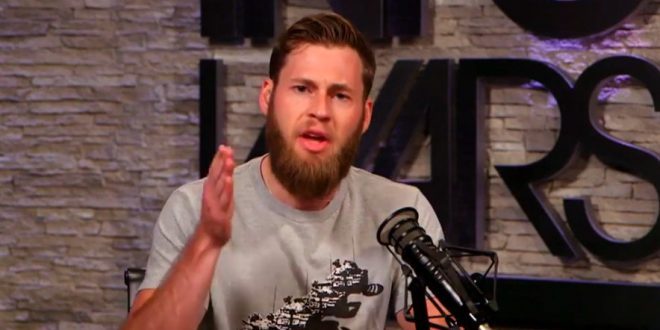 Infowars host Owen Shroyer is facing criminal charges in connection with the Jan. 6 riots at the US Capitol. In a new complaint filed on Friday, the US attorney’s office in Washington charged Shroyer with illegally going into a restricted area on the Capitol grounds and disorderly conduct. He’s one of the highest profile right-wing media personalities to be prosecuted in connection with the insurrection so far.

Shroyer previously had faced criminal charges for disrupting a congressional hearing in December 2019. He entered into a deferred prosecution agreement, which would result in the charges being dropped if he fulfilled certain conditions; those conditions included avoiding further arrest and completing 32 hours of community service. Prosecutors noted in his latest charging papers that as of Jan. 6, he hadn’t finished his community service hours, which meant his earlier case remained unresolved.

Read the full article. Shroyer has appeared on JMG multiple times, such as when he called for lynching President Obama, when he spread the “empty hospitals” hoax during the early days of the pandemic, and when he pushed the QAnon claim that COVID is spread by 5G towers.

New: Infowars host Owen Shroyer has been charged in connection with the Jan. 6 riots at the Capitol — feds say he went into a restricted area outside on the grounds https://t.co/Z7RY4jpv53 pic.twitter.com/A7lgch5F3m

here’s infowars host owen shroyer telling his audience that there is a warrant out for his arrest regarding January 6 pic.twitter.com/B5EzCf9Nru

2/ You might remember Owen Shroyer as the suit-clad man disrupting the 2019 house impeachment hearing.