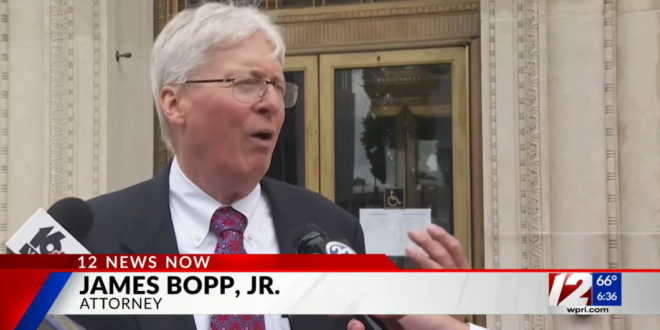 Eight college students challenging Indiana University’s COVID-19 vaccine requirement filed an appeal with the Supreme Court on Friday, asking the justices to consider immunization mandates for the first time since the pandemic began.

Indiana’s public university said in May that students and faculty would be required to take the vaccine to attend classes in person with exceptions for religious objections, medical conditions – such as allergies – and those conducting their coursework online.

Indiana University’s requirement has been backed by a federal appeals court. The Chicago-based U.S. Court of Appeals for the 7th Circuit upheld the requirement in a decision Monday, citing a 1905 Supreme Court precedent that allowed Massachusetts to impose a penalty on those who declined smallpox vaccinations.

RELATED: The students’ attorney, James Bopp, last appeared on JMG in December when he dropped the lawsuits against Biden’s win that he’d filed in four states.

Bopp, who was the lead attorney in Citizens United, made many appearances on JMG a decade ago starting with his representation of the groups, including NOM, who were seeking to overturn same-sex marriage in California.

Bopp also represented the haters in Washington state’s anti-gay Referendum 71 campaign, during which he laughably claimed that “literally hundreds of people were subject to death threats, destruction of their property, theft, threat to their families or even fired from their jobs” for having signed the referendum’s petition.

Oh, and he also represented Focus On The Family in their ultimately successful bid to remake Iowa’s state supreme court following its approval of same-sex marriage.

The students filed an emergency appeal at the Supreme Court, asking the justices to block enforcement of the university’s requirement, which they said violates their constitutional right to bodily integrity under the 14th Amendment. https://t.co/oXMdph0wVM via @jfritze

Interesting to note that students’ counsel of record is James Bopp of Indianapolis, well-known Supreme Court advocate in opposition to almost any type of campaign finance legislation or regulation. https://t.co/PEuzTkZDfY