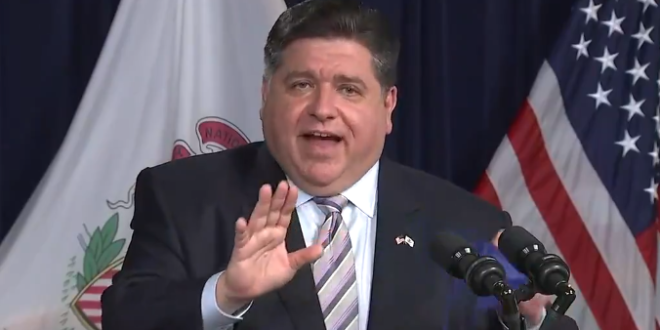 Illinois Gov. JB Pritzker and a local reporter on Tuesday butted heads while discussing COVID-19, with the governor declaring, “You are spreading misinformation.” After a press conference in Chicago where Pritzker signed legislation expanding access to mental healthcare, the governor fielded questions from reporters. As Pritzker concluded his remarks and stepped away from the podium, reporter Amy Jacobson fired back before being cut off by the governor’s press secretary, Jordan Abudayyeh.

“You had a protest out there this morning and parents were crying, screaming ‘oh my God’ — you know as governor you should try and calm people’s nerves maybe, or can you because there are low risk groups,” Jacobson was in the middle of saying before Abudayyeh cut her off. Visibly frustrated by the exchange, Pritzker returned to the podium to address Jacobson’s line of questioning.

Watch how it all went down. It’s good. The reporter works for a local right wing AM talk radio station. Today she retweeted someone calling Pritzker “JellyBelly.”

WATCH: Things got contentious during a Q & A with Gov. Pritzker today when his press secretary shut down a question about possible school closures.https://t.co/mSDnpxiDWV pic.twitter.com/9FIGkZAru0

I think @GovPritzker has a responsibility to calm the nerves of @ChiPubSchools parents who protested outside for remote learning.

They actually think their kids might die if they go back for in person learning.

I challenged him to LEAD! He knows schools are low risk. https://t.co/nPDDKy5sQB pic.twitter.com/UmaNUJKd2O