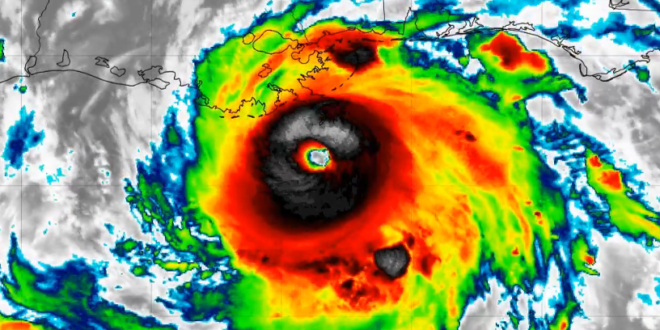 Hurricane Ida has strengthened into a Category 4 as it heads toward landfall on the northern Gulf Coast today, where it will bring life-threatening storm surge, dangerous rainfall flooding and potentially catastrophic winds.

Ida had winds of 150 mph as of 6 a.m. CDT on Sunday, making it a strong Category 4 hurricane. Maximum sustained winds in Ida increased by 70 mph in 24 hours, which easily meets the criteria for the rapid intensification of a tropical cyclone.

Ida is centered about 75 miles south of the southeastern tip of Louisiana and is moving to the northwest at 15 mph. Landfall in southeast Louisiana should occur this afternoon.

Storm surge estimates for Hurricane Ida have increased in the latest update. Now, forecasters said, the storm could push up to 16 feet of water from Port Fourchon to the mouth of the Mississippi River.

Rain estimates have increased as well, with up to 24 inches now possible in southeast Louisiana and southern Mississippi. Warnings related to Hurricane Ida are in effect for Louisiana, Mississippi and Alabama. New Orleans is under a hurricane warning.

🚨 Hurricane Ida making a run at Category 5 in remaining hours before landfall. Winds at 150 mph now according to NHC.
Overnight, Ida exploded in size and intensity, firing on all cylinders over very warm water. Catastrophic. pic.twitter.com/YlBvj1ZYuG

Hurricane Ida now has maximum sustained winds of 150 mph based on data from the Hurricane Hunters flying into the storm, according to the 7 a.m. ET update from the National Hurricane Center. That is just 7 mph shy of Category 5 intensity.

HURRICANE IDA is nearing cat 5 strength with sustained winds of 150 mph. A clear and defined eye wall that is 17 miles in diameter. Life threatening storm surge and flooding with dangerous winds is heading towards southeast Louisiana. #tropics pic.twitter.com/oVUiNTmltg