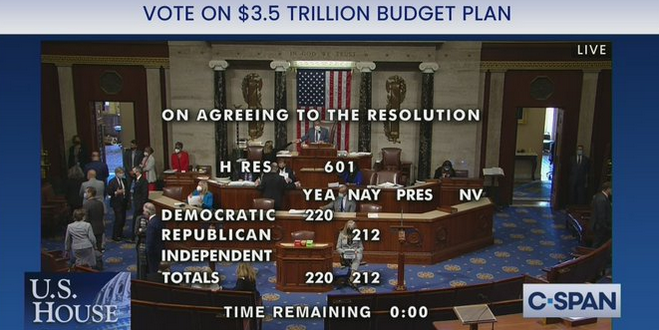 House Democrats on Tuesday approved a roughly $3.5 trillion budget that could enable sweeping changes to the nation’s healthcare, education and tax laws, overcoming internal divisions in a debate that could foreshadow even tougher battles still to come.

The 220-212 outcome came after days of delays as House Speaker Nancy Pelosi (D-Calif) scrambled to stave off a revolt from her party’s moderate-leaning lawmakers. With the frenzy resolved, the chamber averted what would have been a political embarrassment to take the next step in enacting President Biden’s broader economic agenda.

The budget debacle also paved the way for the House to hold a vote on a second economic package — a roughly $1 trillion proposal to improve the nation’s roads, bridges, pipes and ports — by September 27.

220-212: House votes along party lines to pass the Democrats’ $3.5T budget resolution.Members also approved a rule allowing for a vote on the Senate-passed bipartisan infrastructure bill by Sept. 27th and to take up a voting rights bill named for late Rep. John Lewis later today. pic.twitter.com/VqTpb37CtH