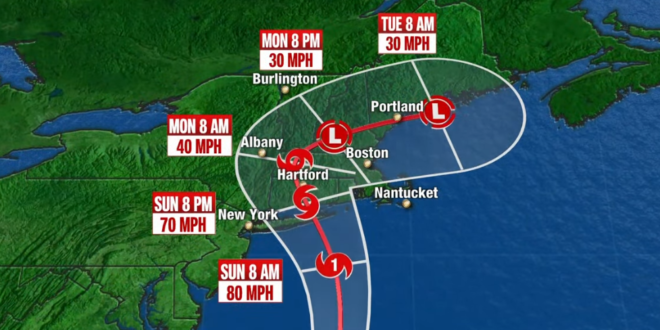 Henri strengthened into a hurricane Saturday morning over the Atlantic on its way to the Northeast, the National Hurricane Center said. Henri, now with sustained winds of 75 mph, is expected to make landfall at or near hurricane strength on Long Island or in southern New England on Sunday, according to the hurricane center.

Severe weather warnings have been issued across the Northeast as millions of people prepare for what could be the first hurricane to directly strike Long Island or New England in a few decades.

The system likely will be felt across a broad area, from New York City and Long Island to parts of New England. Hurricane conditions and heavy rain could start in some of these areas late Saturday.

Governor Ned Lamont has declared a state of emergency in advance of the storm, which will enable the state to take any actions necessary to respond and protect the people of CT. In addition, the CT State Emergency Operations Center will be partially activated by Sunday morning.

Lamont requested the CT National Guard bring 200 Guardsmen to state active duty beginning Saturday morning. They will begin preparation efforts as needed for potential issues that may arise during and after the storm.

Henri has strengthened into a hurricane on Saturday morning as it heads toward the Northeast, according to the National Hurricane Center. https://t.co/YtBLsOZUKS pic.twitter.com/1b00OXcngG

#Henri has strengthened to a hurricane and is headed for Long Island and southern New England. Hurricane and Tropical Storm Warnings have been extended eastward. Here are the 11 am EDT Key Messages. See https://t.co/tW4KeFW0gB for details. pic.twitter.com/lRb61AnHaj

Henri has strengthened to a hurricane, per @NHC 11AM update; track has shifted slightly east, too. Hurricane Warning now in effect for southern RI. pic.twitter.com/KbThWmAjSz

BREAKING: Tropical Storm Henri has strengthened to a hurricane as it barrels towards Long Island and southern New England, the National Hurricane Center says. https://t.co/7SNwvW6JRv

We are continuing to monitor Tropical Storm Henri. Here’s the latest:

-New York City is under a Tropical Storm Warning. We expect strong winds and rain to begin late tonight and last through tomorrow.

A hurricane is headed for the NYC area for first time since 1985.

Hunker down tomorrow if you can. #Henri pic.twitter.com/H8fTYXbqDr