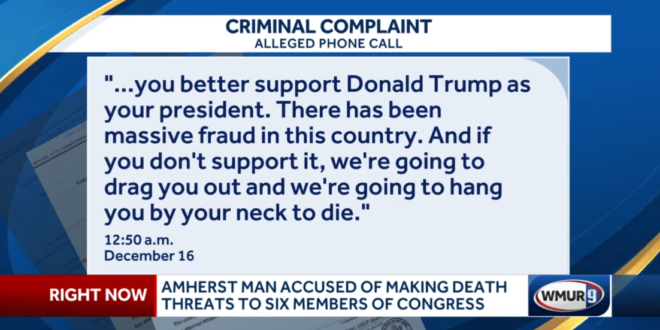 In February 2021, Winegar was indicted by a federal grand jury and charged with six counts of threatening members of Congress and one count of transmitting interstate threatening communications.

According to court documents and statements made in court, in the early morning hours of December 16, 2020, Winegar left voicemails at the offices of six members of the United States Congress in the District of Columbia.

In some of the messages, Winegar identified himself by name or identified his telephone number. The voicemails threatened to hang the members of Congress if they did not “get behind Donald Trump.”

For example, in one message, Winegar allegedly said, “I got some advice for you. Here’s the advice, Donald Trump is your president. If you don’t get behind him, we’re going to hang you until you die.”

Following his arrest on about January 11, 2021, investigators learned of a separate, e-mailed threat to a member of the New Hampshire State House of Representatives on December 14, 2020, in which Winegar threatened to pull the representative from his bed and hang him.

By threatening to kill members of Congress and a member of the New Hampshire House of Representatives, this defendant sought to intimidate public officials. As this prosecution demonstrates, such conduct is not acceptable and will not be tolerated.

Winegar fled to Brazil on Dec. 21, 2020, exactly one day after he discovered that police were investigating his calls to the members of Congress, according to court records. He returned to the United States on Jan. 11 and surrendered to FBI agents after he communicated with a defense attorney.

Along with the violent threats, and racist, anti-Semitic, and homophobic language, Winegar allegedly also left his name and cell phone number on the voicemails.

The names of the members of Congress he called are redacted in the court filings, but 1 transcript suggests that he intended to leave threats to former GOP Sen. Martha McSally, but was surprised when the answering machine said he was calling Sen Mark Kelly https://t.co/gIkjfxy7Fy

Ryder Winegar, of Amherst, NH, has pleaded guilty to threatening to hang six members of U.S. Congress and a New Hampshire state representative. He is scheduled to be sentenced on December 1, 2021. https://t.co/zMRzkPVBCn pic.twitter.com/YlqUrIr2wG