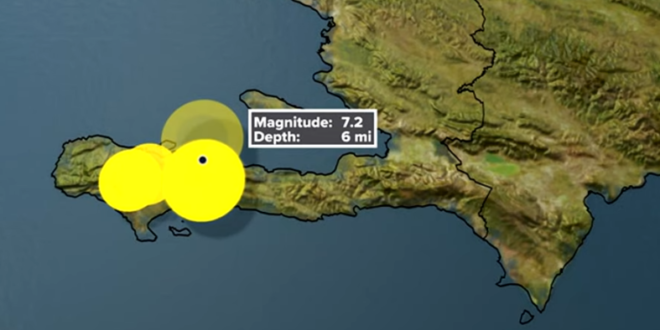 The US Geological Survey said it’s likely that casualties are “high” after a 7.2-magnitude earthquake struck near Haiti Saturday morning. “High casualties are probable and the disaster is likely widespread,” according to the USGS. Haiti’s Civil Protection told CNN there have been fatalities and damage.

A tsunami threat that had been issued for the region has passed, according to the US Tsunami Warning System. A 7.0-magnitude earthquake that struck Haiti on January 12, 2010, left between 220,000 and 300,000 people dead and injured hundreds of thousands more.

The United States Geological Survey said the quake struck five miles from the town of Petit Trou de Nippes in the western part of the country, about 80 miles west of Port-au-Prince. Seismologists said it had a depth of seven miles. It was felt as far away as Jamaica, 200 miles away.

The quake could hardly have come at a worse time for the nation of 11 million, which has been in the throes of a political crisis since President Jovenel Moïse was assassinated on July 7.

At least two cities reported major devastation: Les Cayes and Jeremie. Phone lines were down in Petit Trou de Nippes, the epicenter of the quake, and no news emerged immediately from that city, leaving Haitian officials to fear for the worst.

#NEW: Images reveal mass destruction following the 7.2 earthquake in #Haiti. Similar in strength to the catastrophic earthquake that killed more than 160,000 people in the Caribbean country in 2010, according to a study. pic.twitter.com/1RYFlv31af