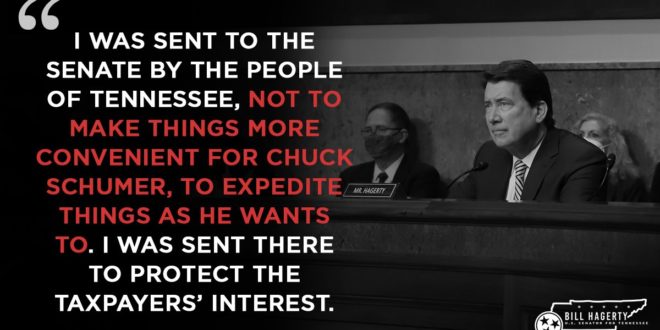 Lawmakers were working behind closed doors to reach an agreement on amendments that could allow the Senate to complete its work on the legislation as early as Saturday night.

Republican Senator Bill Hagerty took to the Senate floor to underscore his opposition to expediting the process, saying the legislation would add to the national debt and set the stage for Democrats to move forward with a separate $3.5 trillion spending package to which Republicans are vehemently opposed.

“There’s absolutely no reason for rushing this process,” Hagerty, a freshman senator who was former President Donald Trump’s ambassador to Japan, said in a floor speech.

I’m on the #Senate floor laying out why I refuse to expedite a vote on final passage of this infrastructure bill that adds to the deficit.

I joined @HeyTammyBruce on @ingrahamangle last night to discuss why I couldn’t agree to accelerate the process & make it easier for Chuck Schumer to shove through the infrastructure bill, just so we can get to the $3.5 trillion, totally partisan tax-and-spending spree.

Look a Terrorist put out a statement: "Trump Threatens to Withhold Endorsements in Last-Ditch Rant to Try and Sink Biden Infrastructure Deal" Trump's statements are like Bin Laden's videos after 9/11 #DonaldBinLaden https://t.co/mC0x9zGbjy via @mediaite