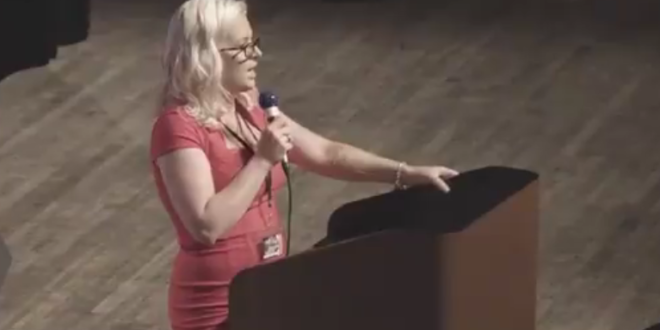 “It’s so good to see to this many people gathered together, you know, especially when they’re trying to push this delta variant on us. As if anybody with half a brain cell would actually believe that. Ha ha! I mean, you know know that it’s not true. It’s just not.” – Rudy Giuliani’s star voter fraud witness and current Michigan House candidate Melissa Carone, speaking yesterday at the Reawaken America Tour in Grand Rapids, Michigan.

Other speakers listed for the tour include Michael Flynn, Lin Wood, Sidney Powell, Mike Lindell, Roger Stone, Patrick Byrne, Charlie Kirk, and a shitload of other QAnon figures and COVID deniers. Below is SNL’s now classic take down of Carone.

Melissa Carone, Rudy Giuliani’s star witness, says anyone with half a brain cell doesn’t believe in the delta variant. pic.twitter.com/ea5al3BOAb

VIRAL MOMENT: Melissa Carone being laughed at during a hearing with the Michigan House Oversight Committee. https://t.co/vwOaN1BHaQ pic.twitter.com/s0R1FltPhi