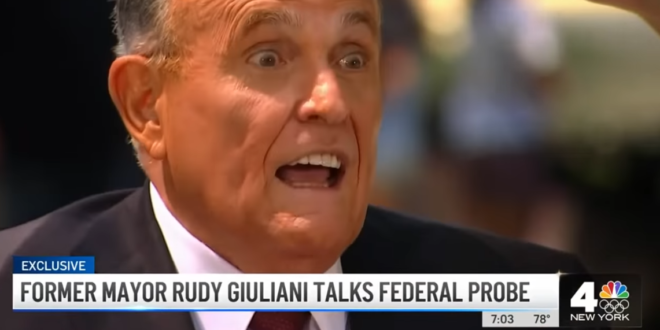 Giuliani: If I Go To Jail, The People Who Put Me There Will Then “Suffer The Consequences In Heaven” [Video]

“I committed no crime, and if you think I committed a crime, you’re probably really stupid, because you don’t know who I am.

“Is the guy who put the mafia in jail, terrorists in jail, Ed Koch’s commissioners in jail, and the worst people on Wall Street — I’m not going to file (a form)? I mean, that’s just crazy.

“I am more than willing to go to jail if they want to put me in jail. And if they do, they’re going to suffer the consequences in heaven. I’m not, I didn’t do anything wrong.” – Rudy Giuliani, speaking to NBC New York.

In the interview, Giuliani also says that the Capitol rioters “committed the crime of trespass” and some “destruction.” Watch the clip.

Previous Belarusian Olympian Asks For Protection After Being Taken To Airport Against Her Will, Plans To Seek Asylum
Next Fox Host: Delta Is A Plot For Dems To Cheat In 2022