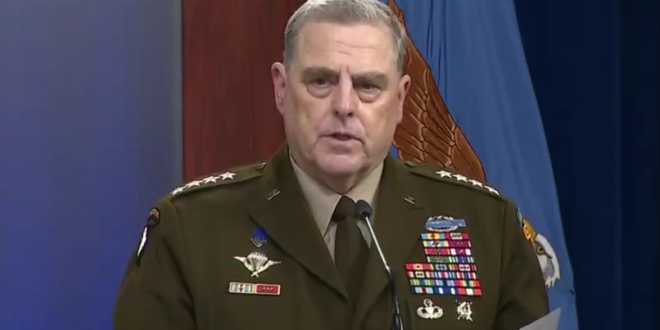 Gen. Mark Milley: “Nothing I Saw Or Anyone Else Saw Indicated A Collapse Of This (Afghan) Army In 11 Days”

“I have previously said from this podium, and in sworn testimony before Congress, that the intelligence clearly indicated multiple scenarios were possible. One of those was an outright Taliban takeover following a rapid collapse of the Afghan Security Forces and the government.

“Another was a civil war, and a third was a negotiated settlement. However, the time frame of a rapid collapse, that was widely estimated and ranged from weeks to months and even years following our departure.

“There was nothing that I or anyone else saw that indicated a collapse of this army and this government in 11 days. There’s plenty of time to do AARs and key lessons learned, and to delve into these questions with great detail, but right now is not that time.

“Right now we have to focus on this mission, because we have soldiers at risk, and we also have American citizens and Afghans who supported us for 20 years also at risk.” – Joint Chiefs of Staff Chairman Mark Milley, this afternoon.

Gen. Mark Milley says “the intelligence clearly indicated multiple scenarios were possible” in drawdown of U.S. troops in Afghanistan, adding: “There was nothing that I or anyone else saw that indicated the collapse of…this government in 11 days.” https://t.co/RcYLXBp792 pic.twitter.com/GAuvIJqzhp