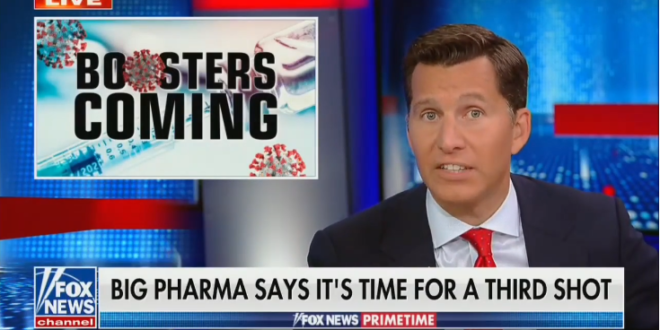 On Fox News Primetime Tuesday night, Will Cain suggested that a Pfizer study concluding that the shot becomes less effective as time goes on is simply part of a scheme to make more money.

“Well, it’s about time to roll up your sleeves and get the jab, again,” said Cain. “The U.S. is expected to recommend a Covid-19 booster eight months after you’ve gotten the second shot.” Cain cited a Pfizer study stating that the vaccine is more effective after six months upon receiving a Pfizer booster.

“Funny how that works,” he said. “But we’re not stupid. Big Pharma isn’t following science. It’s following the money and making an absolute killing off these vaccines.”

Read the full article. Cain recently appeared on JMG when he declared that face masks are only worn by “virtue signaling elites.”

Previous Arizona Gov To Defund Schools With Mask Mandates
Next Spox For Anti-Vax Catholic Cardinal On Ventilator: Stop Bothering Us With Your Suggestions For His Treatment