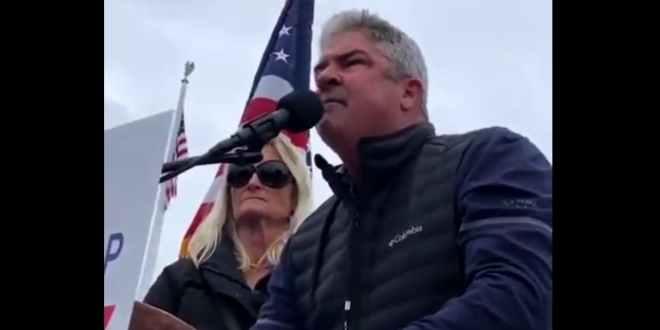 Flynn’s Anti-Vaccine Brother Infected With Something

Another one, two punch day, this time in the life of Joseph Flynn, brother to Michael Flynn. Joseph was speaking recently at a tightly packed, maskless venue on the evils of the coronavirus hoax, when he was diagnosed with the disease he discredited. That sent him down to the tractor supply store — for a remedy, mind you — and sharing that tidbit got him banned from Twitter for spreading COVID disinformation.

Joseph Flynn, social media troll, disinformation spreader, and brother of Michael Flynn, now has covid. He was suspended by twitter last night after he posted that he went to a farm supply store and bought a drug used to kill parasites in animals to treat himself.

The drug he is taking, ivermectin, was featured on a Tucker Carlson show as a covid treatment. The FDA strongly recommends against taking this drug for covid. Oddly enough, Flynn got covid after attending this event at the “DeltaPlex” arena, where he was a featured speaker. pic.twitter.com/asb37MvBSX

His final post. I cut off the bottom of it that had the language that likely got him suspended. I will add this disclaimer. Do NOT do this, and do not, in any respect whatsoever, be like Joseph Flynn. pic.twitter.com/NV4cgo7CYS

What could go wrong? pic.twitter.com/BBF2LmmZGP

The “QAnon oath” video Michael Flynn’s family is suing CNN for reporting on.

Video part 2 of 2 of Joseph Flynn’s @JosephJFlynn1 speech (brother of Mike Flynn) outside the Supreme Court on 1/5. Next to him is seditious sister Barbara (banned @BarbaraRedgate), video up next… pic.twitter.com/FisYVqGUzj