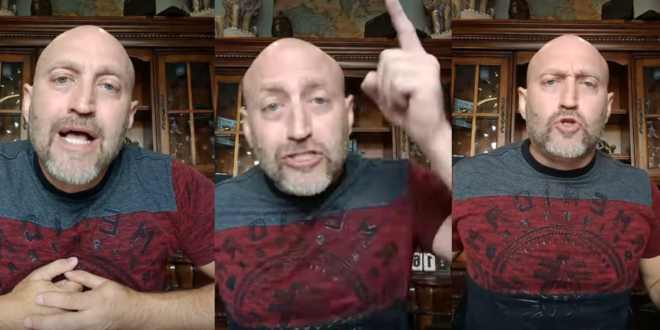 A former Windermere police officer facing federal charges for his alleged participation in the U.S. Capitol riot is railing against his charges in a new YouTube video, calling for other conservatives to “rise up.” Kevin Tuck was arrested in July and resigned from the Windermere Police Department the same day.

“Pastor Kevin here, the patriot pastor, coming to you,” Tuck said in the YouTube video. In the almost 25-minute-long video, Tuck called for conservatives to “rise up,” raging against Republicans and what he considers “alternative lifestyles.”

“The Republican Party is weak,” Kevin Tuck said. “We need to rise up and be conservative again. Do you remember what conservative means, Republicans? Hear me out: We are embracing the homosexual lifestyle as if this is normal.”

Read the full article. Tuck’s son, who is also a now-former Florida police officer, was arrested with his father.

Kevin Tuck aka #HorizontalBlackPB also shows the ugly mixing of insurrection & religion; he’s been a pastor for 15 years at the Lighthouse Church. Their FB: “Children are always looking for a word.. sons become the word.” On Jan 6 he helped his son breach the U.S. Capitol. 9/ pic.twitter.com/t277eBtqQS

Previous Graham: Biden Should Be Impeached For Afghanistan
Next Anti-Vax Cultist Lawyer On Ventilator For Something