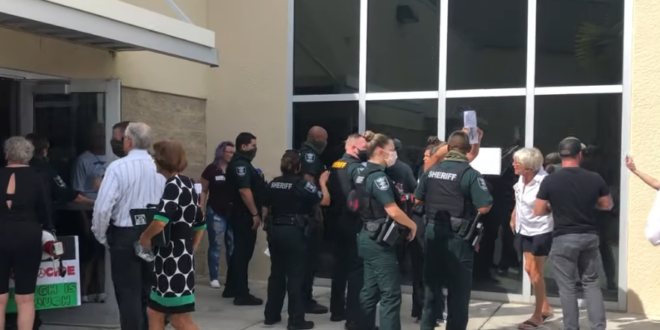 The Lee County School District will now require masks for teachers and students, eliminating the opt-out form. The school superintendent made the announcement Monday. At a workshop meeting Monday, Superintendent Ken Savage said the mandate will be reassessed after that 30 days.

“To those that are angry with this decision today, I will likely not be able to assuage your frustrations,” Savage said. “I can only say if we can save even one additional life that would have otherwise perished then this extraordinary additional effort will have been worth it.”

Physical fights were seen being broken up outside of the district’s headquarters after the mask mandate was announced.

Watch the clips. According to the reporter, parents shoved two doctors as they walked into the building. As he was interviewing them, another scuffle between parents broke out nearby. Fortunately, many local police were already on the scene and ask you can see below, they had even brought a surveillance tower.