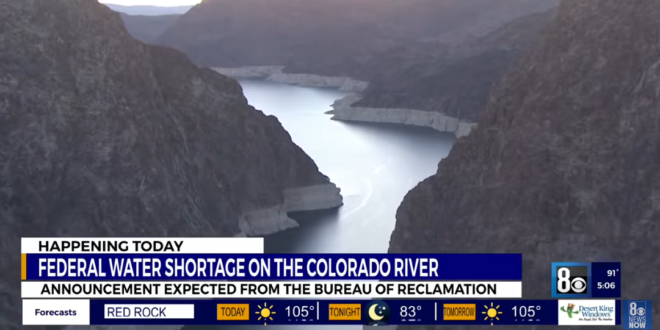 The federal government on Monday declared a water shortage on the Colorado River for the first time, triggering mandatory water consumption cuts for states in the Southwest, as climate change-fueled drought pushes the level in Lake Mead to unprecedented lows.

Lake Mead, the largest reservoir in the US by volume, has drained at an alarming rate this year. At around 1,067 feet above sea level and 35% full, the Colorado River reservoir is at its lowest since the lake was filled after the Hoover Dam was completed in the 1930s.

Lake Powell, which is also fed by the Colorado River and is the country’s second-largest reservoir, recently sank to a record low and is now 32% full.

The West’s water crisis crosses into unprecedented territory, with the first-ever shortage declared on the Colorado River https://t.co/dJSl1F7leW

Previous Biden: “I Stand Squarely” Behind Afghanistan Decision
Next Televangelist: Climate Change Is An Anti-Christ Religion From Satan, God Is Destroying Things Because You Sin