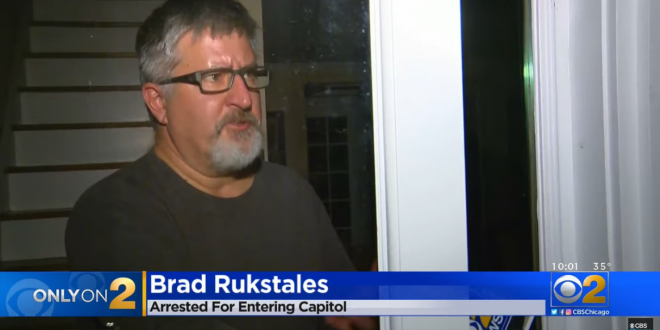 A suburban tech CEO who lost his job after being charged with various offenses related to the Jan. 6 siege of the U.S. Capitol has become the first Illinoisan to be found guilty for his part in the riot. Bradley Rukstales, 53, of Inverness, pleaded guilty in federal court Tuesday. The offense carries a maximum penalty of 6 months imprisonment and a $5,000 fine.

Rukstales was in a crowd of individuals near the House Atrium that was “making loud noises, and kicking chairs, throwing an unknown liquid substance at officers, and spraying an unknown substance at officers,” according to an affidavit from a Capitol Police officer. Rukstales and five other people “willfully refused” Capitol Police officers’ orders to leave.

Read the full article. Rukstales was shitcanned days after his arrest. He then told the Chicago press that joining the Capitol mob was “the single worst personal decision of my life; I have no excuse for my actions and wish that I could take them back.”

Fired suburban tech CEO Bradley Rukstales becomes the first Capitol rioter from Illinois to be found guilty in federal court. He admitted he threw a chair toward cops, though he said he was careful not try to hit anyone. Could get 6 months in prison. https://t.co/gJVAcbWq65