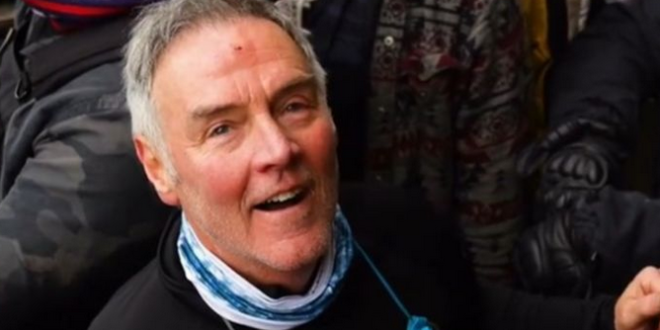 An Ohio man who was identified by online investigators in the aftermath of the Jan. 6 attack was arrested by the FBI on Thursday and charged with attacking law enforcement during a brutal siege on the western side of the U.S. Capitol Building.

Dave Mehaffie of Dayton, Ohio, was known to online investigators as #TunnelCommander because he was issuing orders to members of the mob who were attacking officers during a brutal battle at the lower western terrace entrance to the Capitol.

Mehaffie was 86-AFO on the FBI’s Capitol wanted list, meaning he was wanted for assault on a federal officer. The arrest of #TunnelCommander is yet another boost for online “Sedition Hunters” who have used open-source information to identify the rioters who took part in the Jan. 6 Capitol attack.

Read the full article. Mehaffie was previously targeted in a federal lawsuit for blocking the entrances to abortion facilities around the country.

Here’s the Classmates profile that the image the FBI circulated of “Tunnel Commander” pulls up when plugged into a facial recognition site: pic.twitter.com/anhmbVlYWg

But here’s a real “holy shit” facial recognition moment: When one sleuth plugged in a photo of Dave Mehaffie from back in high school… it pulled up a photo of him at the Capitol decades later. pic.twitter.com/ogUxNZiS2Q

#TunnelCommander/David Mehaffie instigated & closely directed the rotation of “fresh troops” in the brutal tunnel assault from above like a general. New troops went in the right side, armed & ready to beat cops. When they tired, they exited on left. The police had no rotation. pic.twitter.com/hR4Ae3zfJM