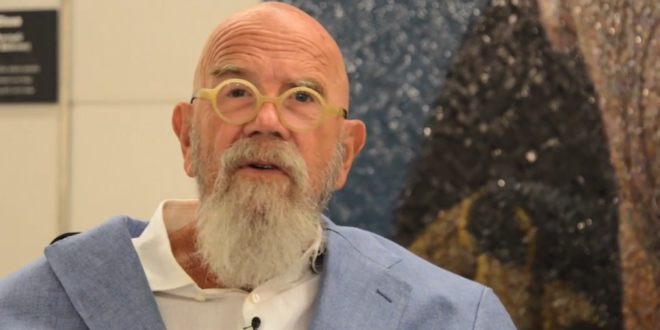 Chuck Close, who rose to prominence in the 1970s and ’80s with colossal Photorealist portraits of himself, family members and fellow artists, but who late in his career faced accusations of sexual harassment, died on Thursday in a hospital in Oceanside, N.Y. He was 81.

At the end of the 1960s, a period when formalist abstraction and Pop Art dominated the contemporary scene, Mr. Close began using an airbrush and diluted black paint to create highly detailed nine-foot-tall grisaille paintings based on mug-shot-like photographs of himself and his friends.

His first, and still one of his best known, is a self-portrait in which he stares impassively back at the camera through plastic black-rimmed glasses. He has messy, stringy hair, his face is unshaved, and a cigarette with smoke rising from it juts from the corner of his mouth — a rebel with a new artistic cause.

You can see Close’s mosaic installations every day in the 86th Street station of the Q line, which opened in 2017. Fans are especially fond of his Lou Reed portrait.

He rose to success with colossal Photorealist portraits, becoming one of the leading artists of his generation, but faced accusations of sexual harassment later in his career. https://t.co/8cwBxYRFBh

RIP to Chuck Close. Seen here at #TIFF 2008 with Julian Schnabel at a discussion following the screening of the Scorsese produced doc Picasso & Braque Go to the Movies. pic.twitter.com/1TalpLjyUN