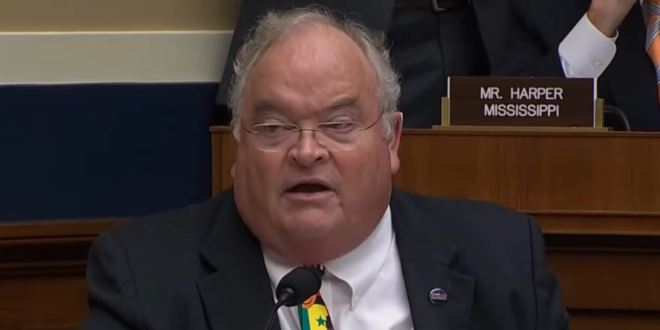 GOP Rep. Billy Long jumped into Missouri’s Senate race Tuesday evening, casting himself as a staunch ally of Donald Trump in a primary contest that is also doubling as a competition to prove loyalty to the former president.

Long, a former auctioneer and radio show host who was first elected to the House of Representatives in 2010, made his announcement during an appearance on Tucker Carlson’s Fox News program.

The congressman is tying himself closely to Trump. On Tuesday afternoon, prior to the airing of the interview with Carlson, Long met with the former president at Trump Tower in Midtown Manhattan, according to three people familiar with the sit-down.

Long appeared on JMG in 2018 when he chased a group of Gateway Pundit morons including Loony Laura Loomer out of a House hearing by “auctioneering” over their shouts.

WATCH: A protester disrupts a House panel hearing with Twitter CEO Jack Dorsey before “auctioneer in residence” @USRepLong drowns her out #tictocnews pic.twitter.com/a7nPVpUn6b

Glad to see ⁦@reddit⁩ & ⁦@Twitter⁩ are all abuzz about my ⁦@realDonaldTrump⁩ $45 Bills! Only bill I got passed last Congress, I got the 45th #POTUS put on the $45 Bill. Signed one for Justice Gorsch at White House Ball & ⁦@TuckerCarlson⁩ tonight.#MAGA #KAG pic.twitter.com/Afn3BkSHHi