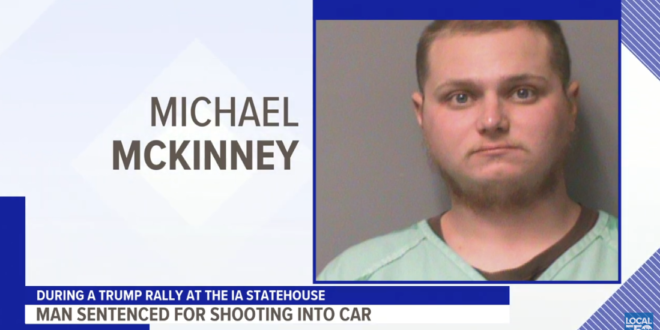 Cultist Gets 10 Years In Shooting At Iowa Trump Rally

A man was sentenced Monday to up to 10 years in prison for shooting into a car full of Black teenage girls after an Iowa rally for then-President Donald Trump, injuring one girl. Michael McKinney, 26, of St. Charles, pleaded guilty in June to intimidation with a dangerous weapon and willful injury in the Dec. 6 shooting after a rally in Des Moines.

Authorities said the girls in the car and rally participants were exchanging insults when the teenagers’ car was surrounded by Trump supporters. The car backed up, hitting a pickup. At that point, McKinney, an Army veteran who was wearing body armor and carrying several firearms, shot into the car, hitting a then-15-year-old girl in the leg.

The Dec. 6 shooting happened in the parking lot of a state office building just east of the Iowa Capitol. It followed a rally on the city’s south side organized by the pro-Trump group Women for America First for supporters who believed that Trump had rightfully won November’s election.

Minnesota entrepreneur Mike Lindell, a major advocate of the so-called “Stop the Steal” movement, was among the speakers.

An army veteran was sentenced after shooting into a car filled with teenagers at a pro-Trump rally and parade in December. “I believed I was going to die,” said the girl injured in the incident. “I didn’t know if I would be able to walk again.”
https://t.co/8QZ0QRHUET