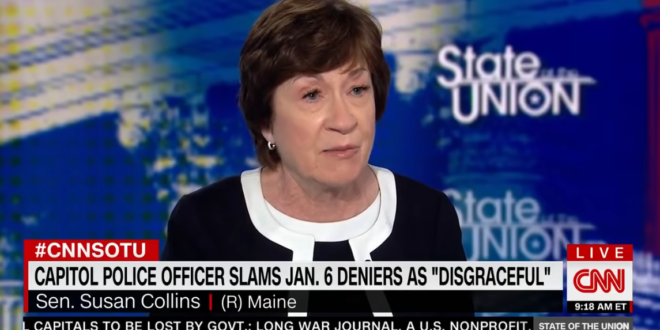 “There were many communications with President Trump that day,” Sen. Susan Collins said Sunday, when asked during CNN’s “State of the Union” whether Trump allies should appear before the panel about his role in inciting the riots at the Capitol.

“While the rioters are primarily responsible for what happened, there’s no doubt in my mind that President Trump helped instigate and motivate the rioters,” she continued.

Collins told CNN’s Jake Tapper that she was “disappointed” the committee was blocked, then criticized the House committee as “partisan” and questioned its motives.

Susan Collins says on CNN that she thinks it was wrong for Pelosi to pick which Republicans serve on the Jan 6 committee, suggests she wasn’t troubled by the idea of material witness Jim Jordan serving on it because “there were many communications with President Trump” on Jan 6 pic.twitter.com/fn2vyGYc2e