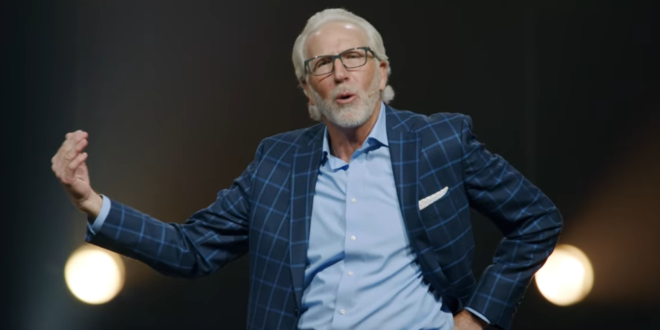 A Rocklin church handed out hundreds of exemption letters Sunday for people who do not want to take the COVID-19 vaccine. This followed recent announcements from several employers imposing new vaccine requirements on employees.

During Sunday service, Pastor Greg Fairrington of Destiny Christian Church explained his reasons for offering the exemption letters. “You have the freedom to choose, and nobody should be able to mandate that you have to take a vaccine or you lose your job. That’s just not right, here in America,” Fairrington said.

Parking at the church was scarce on Sunday. In addition to regulars showing up, there were people who said they went specifically because they heard about the exemption letters. Crystal Miller of Merced said she drove for more than two hours.

Destiny Christian Church, which averages 10,000 people online and in-person for its worship services, recently sent a statement to the Los Angeles Times explaining the importance of the exemption letters.

Fairrington said the church has gotten “thousands of phone calls from doctors, nurses, educators, and first responders, in tears, fearing that their livelihoods hang in the balance because of their religious convictions.”

Fairrington made headlines earlier this month when he urged congregants to vote to recall Gov. Gavin Newsom during the recall election on Sept. 4. He told The Sacramento Bee that Newsom’s policies during the pandemic have had “traumatic consequences for families, schools, communities, and the church.”

In the second clip below, the pastor tells Charlie Kirk that attending his church is “a lot like a Trump rally.”

Previous Alex Jones: “Shame On You, Trump” For Promoting The Vax, “You’re Not That Bright, Maybe You’re A Dumbass”
Next First Lady’s Spox Demands Apology From Fox News