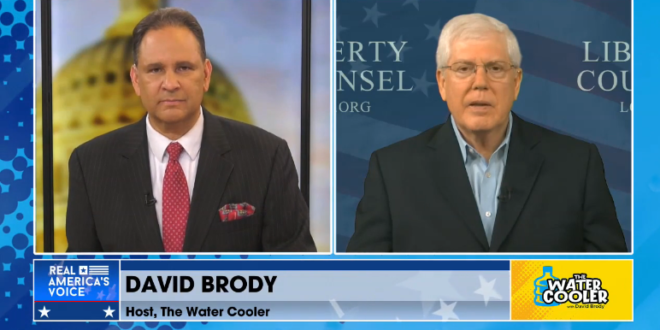 DAVID BRODY (HOST): As the Liberty Counsel points out, since the vaccine has only been approved for emergency use authorization and not full FDA approval, any mandates for this vaccine would be a violation of federal law.

So why? Well, because it would violate a little thing called the Nuremberg Code, a code mentioned on the FDA website — not pizzagate.com or conspiracy.net — the Nuremberg Code emphasizes that people cannot be forced to take experimental drugs without their full consent.

Now, interestingly here, the term Nuremberg Code originated in 1947 Germany during the Nuremberg trials, where, of course, Nazi doctors attempted to excuse the inhumane, deadly experiments that they conducted on concentration camp prisoners by claiming that there were no explicit rules governing medical research on human beings in Germany during that period.

Now, look, I’m not saying the COVID vaccine is going to make you grow a third arm or anything like that. Here’s the point. I don’t actually know what it could do to you. No one does. Actually, Dr. Fauci knows. He simply knows everything. I’m dripping sarcasm when I say that.

In seven months, we’ve had more people die from the COVID shots than in the 31 years total combined from all vaccines when they began logging the VAERS from July 1, 1990, to the present.

They [the Nazis] were experimenting on Jews and others that they had in their custody and they were doing inhumane treatments without their consent.

Read the full transcript. There’s much more crazy. In addition to his web show seen below, David Brody is a host for Pat Robertson’s Christian Broadcasting Network.

Here’s David Brody, formerly a regular panelist on Meet the Press, on his show today likening the current push for vaccinations to Nazi Germany. pic.twitter.com/80dOUZ4tUV

Brody lashes out at Trump for promoting the vaccine, and says people who take it are allowing themselves to be guinea pigs pic.twitter.com/txyuGiu1ht

Brody does say that “I guess we have to do the disclaimer about the Holocaust and Jews — we’re not talking about that specifically” pic.twitter.com/He8hlJS0GZ