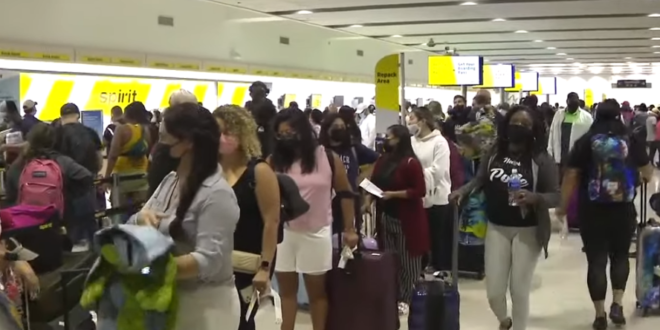 Hundreds of travelers in Broward County and beyond were stranded after Spirit Airlines cancelled over 250 flights nationwide. The Air Line Pilots Association said Monday morning, in an email to the South Florida Sun Sentinel, that reports of a strike are false. And Spirit spokesman Erik Hofmeyer echoed that, blaming cancellations on weather and “other operational challenges.” The airline did not respond to requests for comment Monday.

Read the full article. Some on social media are claiming the cancellations are due to a “sick out.”

Fort Lauderdale airport (FLL) reported 59 flight cancellations Monday, 55 of which were from Spirit Airlines, according to https://t.co/65TBz4gJbo. On Sunday, Spirit accounted for 34 of 37 cancellations at the airport. https://t.co/yR2pN74CI6 pic.twitter.com/yEsYLEd8DL

SPIRIT CANCELATIONS ✈ | Frustration was the name of the game at Orlando International Airport after 33 Spirit Airlines flights were canceled since Sunday night. https://t.co/Nmx0MX2I12