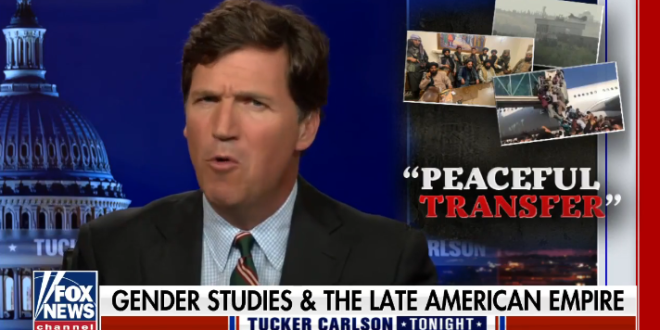 “Thanks to American-imposed gender quotas, dozens of women ultimately were installed as representatives in Afghan’s parliament. How did that work?

“Well, the whole thing was a sham, as always. In fact, many of these new female legislators had never been to the provinces they claim to represent.

“It caused revolts, but officials kept doing it, they kept pushing radical gender politics anyway, because they could, because they were in charge of these Stone Age people they were going to educate.

“This is the face of the late American empire, gender studies seminars at gunpoint. This is not like other empires. Unlike other empires, ours does not operate for our benefit. America toppled Saddam, but took no oil, remember that?

“It turns out that the people of Afghanistan don’t actually want gender studies symposia. They didn’t actually buy the idea that men can become pregnant. They thought that was ridiculous.

“They don’t hate their own masculinity. They don’t think it’s toxic, they like the patriarchy, some of their women like it too, so now they’re getting it all back. So maybe it’s possible that we failed in Afghanistan because the entire neoliberal program is grotesque.” – Tucker Carlson.