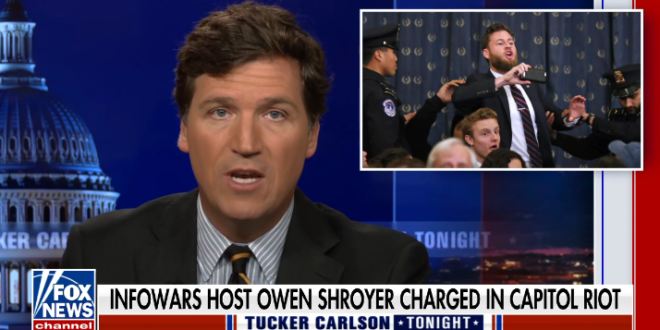 “What’s going on here exactly? Well, Owen Shroyer’s real crime appeared to have occurred in December of 2019 when he shouted mean things to Jerry Nadler during a congressional hearing. The DOJ accused him of disorderly conduct and told him, ‘Never go near the Capitol again. You don’t want to hurt Jerry Nadler’s feelings.’ He disobeyed. Now, he’s going to jail on Monday.

“Are you cool with this, Dick Cheney’s daughter? Is that all right with you? Is this the country you want to live in? How about that, Adam Kinzinger? Is this the ‘democracy’ you fought for? Please. So the ringleaders of the riots go free, especially if they’re working for the FBI, but the people who offend Joe Biden’s friends, they’re in jail.” – Tucker Carlson, last night.

2/ You might remember Owen Shroyer as the suit-clad man disrupting the 2019 house impeachment hearing.