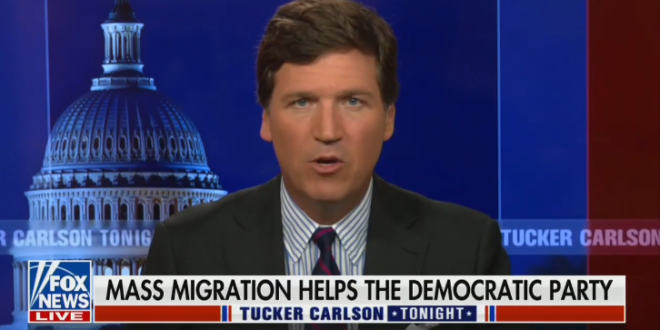 Fox News’ Tucker Carlson doubled down on Friday after being called out for pushing “replacement theory” earlier this week. On Fox & Friends, Carlson said the Biden administration is “bringing felons, violent criminals into our country on purpose” because they want “to change the demographics of the country.” Carlson continued on Friday night, insisting he’s “pointing out the obvious.”

He mockingly remarked, “They said we were espousing something called the great replacement theory, a well-known racist fantasy. Right. In other words, ‘shut up.’ Democrats are intentionally accelerating demographic change in this country for political advantage, so rather than convince people to vote for them – that’s called democracy – they’re counting on brand-new voters.”

Can’t overstate how dangerous this is: Tucker Carlson continues to give a primetime megaphone to white supremacist replacement theory. This is the same exact conspiracy that fueled deadly terror attacks in Charlottesville, Pittsburgh, Christchurch, Poway, El Paso… https://t.co/Fmpcap6M5x