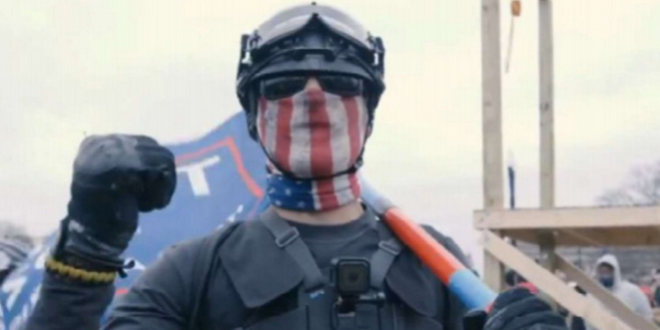 When David Dempsey was arrested in California on Thursday and charged with attacking police officers defending the US Capitol on 6 January, local activists in Los Angeles were not surprised.

Federal prosecutors have accused 34-year-old Dempsey of striking police at the Capitol with improvised weapons, including a crutch and a pole, and spraying them with a chemical agent, according to the criminal complaint against him.

We believe the man who attacked police at the Capitol with bear spray and a flag pole is David Dempsey, a Proud Boy from Los Angeles.#FlagGaiterCopHater‘s helmet, patch, ACP pants, bracelet, hair (man bun), shoes, build, & voice are a match for David Dempsey’s. #SeditionHunters pic.twitter.com/Xhlctya6f6

Here is a clear photo of David Dempsey (left) with the yellow-and-black paracord bracelet on his right wrist, posing with fellow Proud Boys Brandon Recor (from LA) and “Sparkplug” (from Sacramento), on the evening of Nov 21st in Sacramento. pic.twitter.com/S3vIjDTPGO

Here is another attack by David Dempsey with the same skateboard, on Aug 14 in Tujunga.

Dempsey (“Free Commie Rides” shirt with the black balaclava) runs from behind to hit @IASmovement in the head with a skateboard, then runs away.

LAPD has refused to investigate this assault. pic.twitter.com/7b1vz7ZG9N

Feds announce arrest of David Dempsey in Jan 6 case, dubbed #FlagGaiterCopHater because of his attire

He’s accused of using chemical agent, crutch and metal pole against police on frontlines. Feds cite the work of @SeditionHunters in tracking down Dempsey pic.twitter.com/eKXPpcYL2b

Okay so, this may be my proudest #seditionhunter day so far…graphics I created were used in the charging documents for David Dempsey, #flaggaitercophater. Just when you feel like the work doesn’t pay off or it takes too long or just helpless & pissed a day like today happens! pic.twitter.com/zMtbzJmAt2