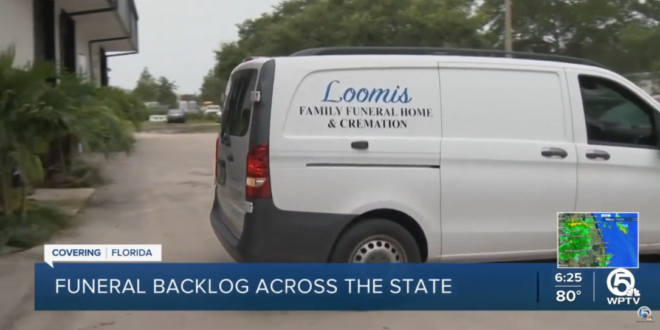 At West Side Crematory in Winter Garden, they’re overwhelmed with the remains of people that need to be cremated. There’s an influx of bodies like they’ve never seen, worse than the first wave of COVID-19.

The area where bodies are stored prior to being cremated is stacked to the ceiling. The staff is working day and night to honor the dead.

WESH 2 called 20 funeral homes and crematories and many were too busy to be part of our story. Some were too busy to even talk on the phone. One funeral director said that in a 30-minute period where he talked to his partner, four new cases came in.

📍In Florida, crematories are so overwhelmed with the deceased that bodies are “stacked to the ceiling”. There’s an influx of bodies like never seen before—worse than last year. Crematoriums in Orange County are begging for Florida to “supply some refrigeration”. @WFLA #COVID19🧵 pic.twitter.com/Ji2FX3qbfl