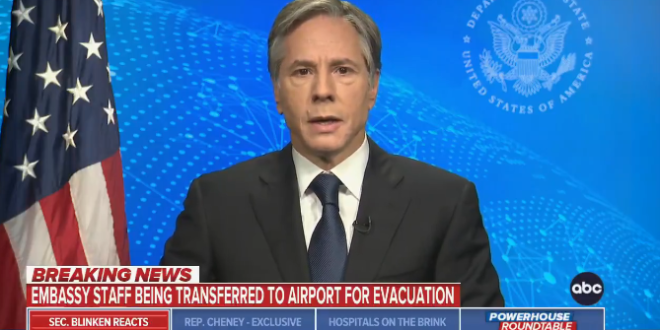 Blinken: US Has Begun Evacuation Of Kabul Embassy

Without saying directly that the U.S. was shutting down its embassy in Afghanistan, Secretary of State Antony Blinken said Sunday that the U.S. was evacuating personnel from the facility in Kabul. “We are working to make sure that our personnel are safe and secure,” Blinken told host Jonathan Karl on ABC’s “This Week.”

“We’re relocating the men and women of our embassy to a location at the airport. It’s why the president sent in a number of forces, to make sure that as we continue to draw down our diplomatic presence we do it in a safe and orderly fashion,” he said.

JUST IN: @SecBlinken tells @jonkarl that personnel at U.S. embassy compound in Kabul are being relocated to the airport “to ensure they can operate safely and securely” amid Taliban advance. https://t.co/l51U8jicQB pic.twitter.com/iUzFXBbVxu

Asked by @jonkarl if officials are concerned U.S. embassy in Kabul could be taken over by Taliban, @SecBlinken says removal of American flags and sensitive items is “standard operating procedure in any such situation.” https://t.co/YijDOBMhQD pic.twitter.com/KqL2omVtZ1

Pressed by @jonkarl about U.S. embassy officials being evacuated from Kabul amid quick Taliban advance, @SecBlinken says “this is not Saigon.”

“In terms of what we set out to do in Afghanistan, we’ve done it.” https://t.co/i0IcGXExz4 pic.twitter.com/N6tFLBd0Al

Secretary of State Blinken on Afghanistan: “That status quo was not sustainable. Like it or not, there was an agreement that forces would come out on May 1. Had we not begun that process… then we would have been back at war with the Taliban… with tens of thousands of troops” pic.twitter.com/HZx8vwTYhA

Blinken blames the Trump administration for Afghanistan hurdles: “We had to put in place an entire system to deal with this. Unfortunately none of that work was done when we came in.”