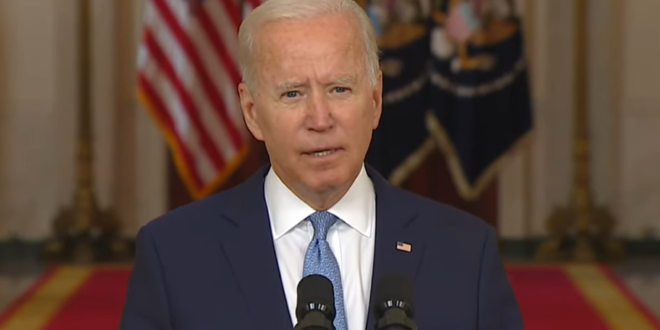 President Biden on Tuesday hailed what he called the “extraordinary success” of the evacuation of Kabul as he vehemently defended his decision to end America’s war in Afghanistan, just one day after the end of a two-week rescue of 125,000 people from Kabul that saw the deaths of 13 service members. Speaking from the Cross Hall at the White House, Mr. Biden said the nation owed a debt of gratitude to the troops who died in the evacuation mission.

Mr. Biden appeared intent on forcefully rejecting criticism of the end of the 20-year war in Afghanistan, offering a defensive recounting of his decision-making and blaming former President Donald J. Trump for negotiating a bad deal with the Taliban that boxed Mr. Biden and his team in. “That was the choice, the real choice between leaving or escalating,” Mr. Biden declared, his tone angry and defensive as he opened the first minutes of his remarks. “I was not going to extend this forever war.”

“I take responsibility for the decision”: Biden defends how U.S. exit from Afghanistan played out, saying that “there is no evacuation from the end of a war that you can run without the kinds of complexities, challenges and threats we faced. None.” https://t.co/tPPRTVvTiZ pic.twitter.com/etg25fH1aO

Previous FL Parent To School Board: “You Are Demonic Entities, We’ll Take You Down By The Authority Of Christ Jesus”
Next GA Health Commissioner Reveals That Anti-Vaxxers Threatened Nurses And Shut Down Vaccination Clinic