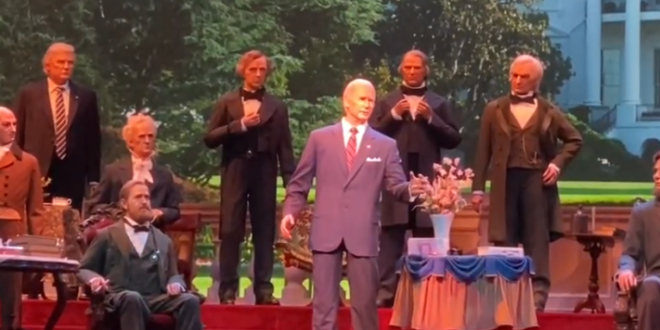 The Hall of Presidents has reopened at Walt Disney World with President Joe Biden front and center at the Magic Kingdom attraction. Biden’s animatronic is seen reciting the presidential oath of office as his 44 predecessors look on. “I, Joseph Robinette Biden Jr. … ” the short spiel begins. Biden recorded the words in the White House for the Disney attraction.

The likeness of Donald Trump, his immediate predecessor, now stands behind and over Biden’s right shoulder. Like several of the more modern presidents — including Richard Nixon, Gerald Ford, Bill Clinton and Barack Obama — Trump now stands on the top row of the tiered stage. The Trump statue — which was mocked after being unveiled in 2017 — reportedly required live security guards to protect it.

The animatronic recreation of President Biden made its debut at Disney World Resort’s Hall of Presidents. https://t.co/dBs9cmpK3L

biden animatronic dropped at the hall of presidents today pic.twitter.com/RGhYFLqXES

The animatronic of President Joe Biden has debut in The Hall of Presidents attraction at Magic Kingdom pic.twitter.com/X6EK0vTwaw