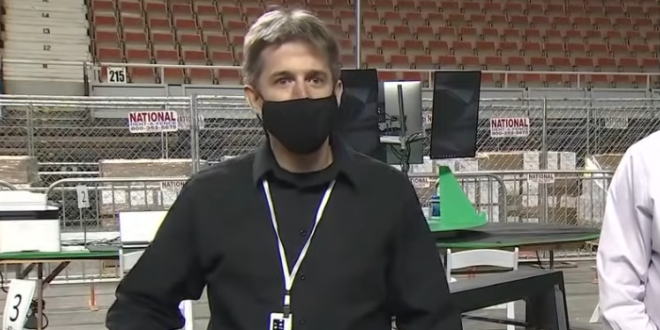 Cyber Ninjas, the private firm leading a partisan and much-criticized audit of millions of ballots cast in Arizona during the 2020 election, has refused to comply with a congressional probe into the company, House Democrats said.

In a letter dated Sunday to Cyber Ninjas CEO Douglas Logan, the Democrats said they “will be forced to consider other steps to obtain compliance” if the company “continues to obstruct” their investigation.

That warning came as the Florida-based firm, which lacked prior election auditing experience and whose owner had tweeted support for pro-Trump election conspiracies, was set to deliver a report on its findings to the Arizona Republicans who commissioned it.

The firm is led by CEO Doug Logan [photo], a noted supporter of Donald Trump who earlier this year authored a document promulgating a series of conspiracy theories about the 2020 presidential election and falsely accused President Joe Biden of committing election fraud.

In a four-page letter to Logan, Chairwoman of the House Oversight Committee Rep. Carolyn B. Maloney (D-N.Y.) and Rep. Jamie Raskin (D-Md.) wrote that Cyber Ninjas had “raised a litany of unjustified objections” to the panel and advised Logan to “end your obstruction immediately and comply with the Committee’s requests.”

Congressional investigators had previously sent a letter to Logan on July 14, requesting documents and communications as part of the Committee’s investigation into the firm’s “highly unusual” audit.

The Cyber ninjas have covid — https://t.co/PlMMXx6M6q

“Unfortunately, Cyber Ninjas CEO Doug Logan and two other members of the five-person audit team have tested positive for COVID-19 and are quite sick…” https://t.co/xpi5o2ourJ