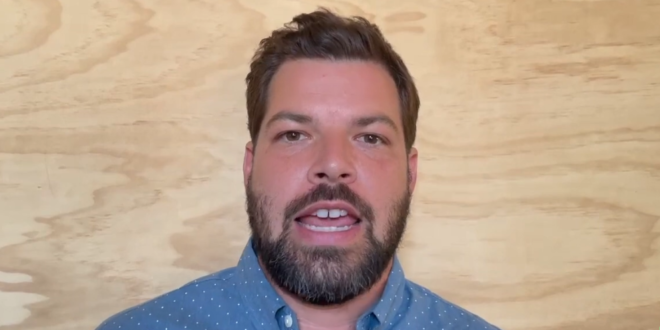 A website purportedly offering money to people willing to snitch on their unvaccinated family, friends, and neighbors for breaching vaccine mandates has gone viral in anti-vaxxer circles. But just like so many other things shared in these groups, the “anonymous unvaccinated reporting system” is completely fake.

Not only that, the website was designed and built by David Bramante [photo], a realtor and a Republican candidate running for governor in California’s recall election, who says the website was simply a piece of “political satire” designed to highlight what he views as unconstitutional vaccine mandates.

AURS, a website that encourages users to report their unvaccinated family members and friends for a prize of $2,500, is going viral in anti-vaccine circles. Problem? It’s a satirical website launched by an anti-lockdown candidate in the California gubernatorial recall election. pic.twitter.com/6pNLjD04l2

Still under the delusion that we are not living in some Orwellian dystopian nightmare? I give you the Anonymous Unvaccinated Reporting System. If you do not push back on outright tyranny like this, it will only continue to grow out of control. https://t.co/aOGLjSRFmU pic.twitter.com/EjcfEb9IBy

AURS a website made for reporting the unvaccinated anonymously, apparently snitches get a chance to win upto $2,500 on a monthly draw. pic.twitter.com/Sp4NMBtnGH

Oh my G.. this is real. This is so #OldSovietBlock that it is difficult to believe it exists.
Land of the Free? Apparently not.
I can see it now:
Kids bully your kid? File a report.
Neighbors party too loud? Report them.
No potential for abuse here…https://t.co/K3KlPgMzWL pic.twitter.com/PClflTWDO5

Previous Riot Suspect Charged With Strangling Family Member
Next Cultist Pastor: “You Don’t Need The Vax, You Got Jesus”