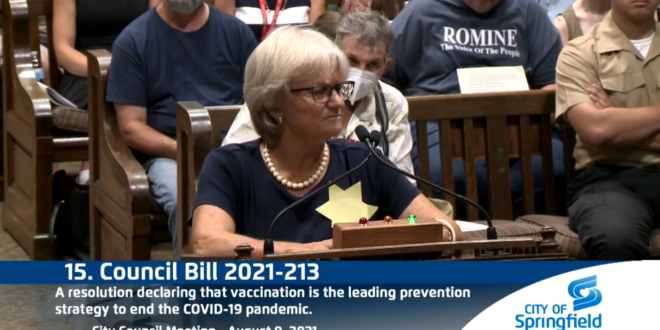 Despite a packed and rowdy crowd opposed to the measure, the Springfield city council Monday night passed a nonbinding resolution encouraging vaccination against COVID-19.

The proposal was purely symbolic, but opposition to the measure was fierce over the five-hour council meeting — and included misinformation, jeers, and allusions to the Holocaust. But Councilwoman Angela Romine does not agree with the rest of the council on the COVID-19 vaccine.

Many in the crowd wore shirts in support of Romine, reading “ROMINE: voice of the people.” A smaller group of about 15 wore a bright yellow, felt star on their chest, which one speaker said was a way to compare the city’s vaccination campaign to the holocaust and extermination of more than six million Jews by the Nazi regime.

This thread on a Springfield City Council meeting is a wild ride. It’s literally just a bill that says vaccines are good. https://t.co/qQYlwOiQPx

Asks if CDC is lying, people in crowd yell, “Yes!” Same for Cox and Mercy.

Micah Aden is next. She tells reporters to “stick to the facts.”

Points to yellow star on herself, says we’re going down that path again

Swane Loftus, I believe, is next. He says President Trump talked about hydroxychloroquine, says Fauci lied about the drug. Says hydroxi is “highly effective” for COVID.