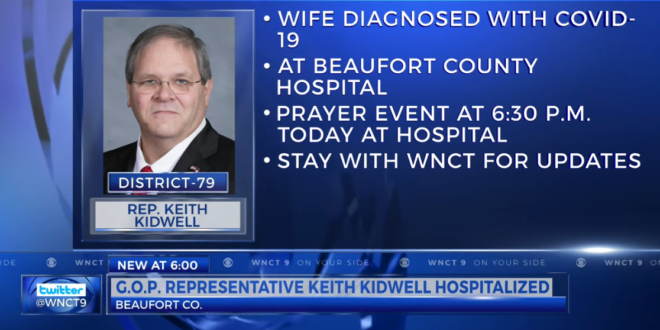 N.C. Rep. Keith Kidwell is hospitalized Friday after writing on Facebook that his wife, Viki, has COVID-19. The Beaufort County Republican Party asked people to gather at 6:30 p.m. outside the Beaufort County Hospital to pray for the Kidwells, the hospital workers and other patients.

Kidwell has been a vocal opponent of the measures that Gov. Roy Cooper has taken to slow the COVID-19 pandemic.

He has filed lawsuits, joined ReOpen NC rallies, refused to wear a mask, spoken out against requiring vaccines and filed legislation to strip the governor of his ability to declare a state of emergency unilaterally.

The Beaufort County Republican Party announced a prayer vigil Friday night outside the hospital where the rep and his wife are being treated. https://t.co/7GDWZsbZFO

While meeting with #ReOpenNC organizers Rep. Keith Kidwell says if he thought filing articles of impeachment against @NC_Governor would accomplish something positive he would, but he says it will only cause further division. @WNCN pic.twitter.com/rlvCwl4Fe8