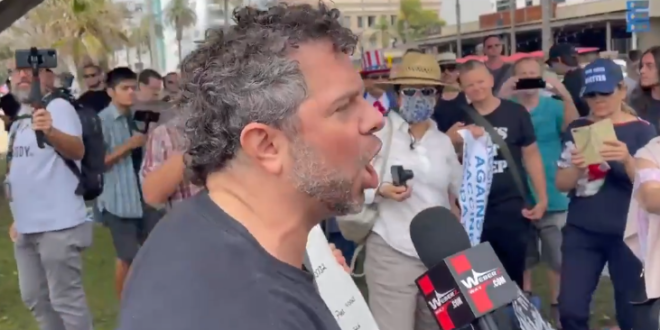 On Sunday, at a Santa Monica rally ahead of Monday’s mask mandate vote by the Los Angeles City Council, anti-vaccine activist Jason Lefkowitz shared the home addresses of council members with his crowd, vowing to track down any who vote for the measure — and saying that there will be a “civil war” if the measure passes.

Lefkowitz, who is known for wearing a yellow Star of David patch and making Nazi salutes at businesses with COVID-19 safety measures in place, has previously made violent threats against door-to-door vaccine volunteers, urging his followers to “sharpen your knives” and “get your guns” in preparation.

Jason Lefkowitz, a comedian turned activist, was carrying a list of LA council members’ home addresses, encouraging all at the event to intimidate them against voting for vaccine mandates. “It would nice if it were unanimous our way… Civil war is coming people… get your guns…” pic.twitter.com/YbqrxM2A2w

Jason Lefkowitz went on to speak to the crowd about the LA council members vote on Monday and encouraged the crowd to show up at their homes to intimidate them. He held a sign with all of their alleged home addresses. pic.twitter.com/L2Np3MfoYi

Dr. Christopher Rake, an anesthesiologist from UCLA medical center, tells the crowd, “They want to force a vaccination or medication or treatment into my body that I don’t want. So they’re telling me, ‘Take the jab or we take your job.’ And I’m here to say no. That’s not ok.” pic.twitter.com/wP2kZyS1o7

After warning the crowd against listing their religion as an exemption to the vaccine (he says the gov’t will come after you & restrict your travel), Dr. Christopher Rake ends his speech with a Q-Anon chant. pic.twitter.com/OLMe4aEC3p

This doctor (did not catch his name) spread a lot of misinformation during his speech. This was the most glaring. “We can even bring up the fact that Japan now has named Ivermectin the official drug for COVID patients.”

These guys (and others) in orange armbands were following me around while livestreaming today’s event. pic.twitter.com/B4mpRwPAww