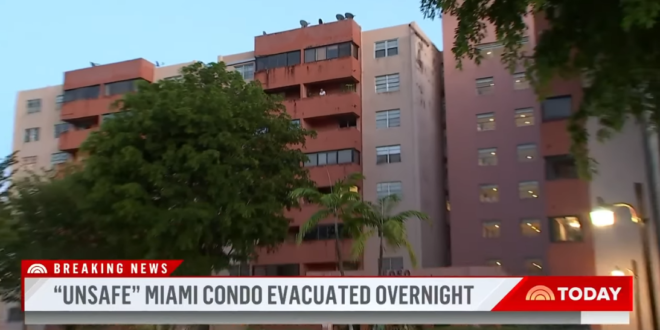 A condominium in Miami is being evacuated Monday after officials deemed it an unsafe structure. An evacuation noticed was posted at the entrance of the building at 5050 NW 7th Street.

Hundreds of residents from 137 units had only hours to leave, according to a city official. “We have a lot of elderly owners here that have no place to go,” Dmidry Asanov said. “Some have COVID, some can’t walk.”

Miami’s building director says several columns needed serious repairs. The building association began the repairs without first getting permits from the city, he said, and because of that, the work they did was not good enough.

Hundreds of Miami residents forced from their 8-story condo building on Monday night after city officials determined the structure was unsafe. https://t.co/BoF4y7hr0r