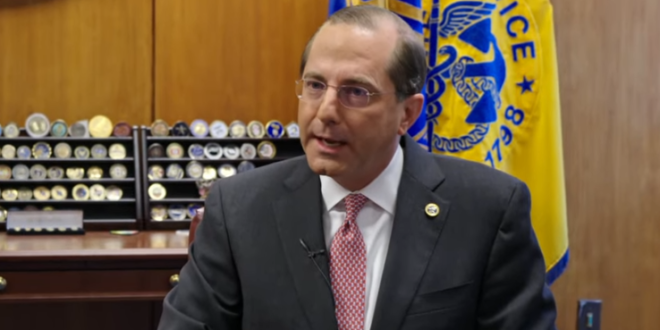 Alex Azar: Trump Should Have Gotten Vaccine On TV

Former Trump HHS Sec. Alex Azar today published an op-ed in the New York Times in which he heralds himself as the “architect” of Operation Warp Speed before going on to tout the effectiveness of COVID vaccines. There’s also this:

We could have done more to address vaccine hesitancy. We focused a great deal of our efforts at the start on the groups that we thought might be most hesitant.

But we did not predict the politicization of vaccines that has led so many Republicans to hold back. As of mid-July, 43 percent of Republicans said that they have not been vaccinated and definitely or probably wouldn’t be, versus 10 percent of Democrats, according to a poll from The Associated Press-NORC Center for Public Affairs Research.

I’m glad former President Trump got vaccinated, but it would have been even better for him to have done so on national television so that his supporters could see how much trust and confidence he has in what is arguably one of his greatest accomplishments.

Azar resigned shortly after the attack on the Capitol, ostensibly in protest to Trump’s role. Azar, you will recall, parroted some of Trump’s lies about the pandemic and publicly contradicted statements by the CDC, the FDA, and other health officials. Perhaps most memorably, Azar blamed the “home and social lives” of meatpacking workers after an outbreak tore through major plants.

“Whether a person lives in a red or a blue state has no bearing on the vaccines’ efficacy,” says Alex Azar, who oversaw Operation Warp Speed. “They work incredibly well, and more than 160 million fully vaccinated Americans are proof.” https://t.co/cbYxPV8WA0