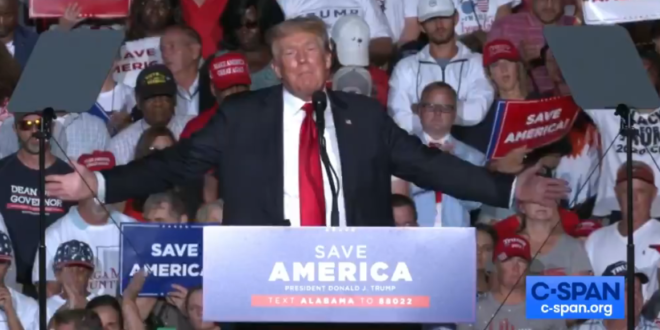 Former President Donald Trump was booed by his supporters at a “Save America” rally in Cullman, Alabama, on Saturday night after he suggested that they get vaccinated against COVID-19.

The former president then told his supporters that the vaccines are “good” and once again encouraged them to get a shot. This suggestion was met with boos, as can be heard in a video shared by Vox journalist Aaron Rupar.

Donald Trump booed at Alabama rally after encouraging his supporters to get vaccinated against COVID-19, video shows https://t.co/OVfZGQ6tqZ

Trump advises his audience in Alabama to take the Covid vaccine pic.twitter.com/aaxQfnnxoh

Trump on the delta variant: “I’m shaking hands with everybody backstage. I say, well, I don’t know, is this a good thing or bad? You’ll read about it three or four days, maybe. Hopefully not.” pic.twitter.com/ElCohCrgBx

Trump pushes the big lie within seconds of taking the stage in Cullman, Alabama pic.twitter.com/D6l9zwegbk

Trump responding to boos in Alabama after saying: “I recommend take the vaccines. I did it. It’s good. Take the vaccines”:
“That’s okay, that’s alright. You got your freedoms. But I happened to take the vaccine. If it doesn’t work, you’ll be the first to know. But it is working.” pic.twitter.com/seJfGYtl5Y